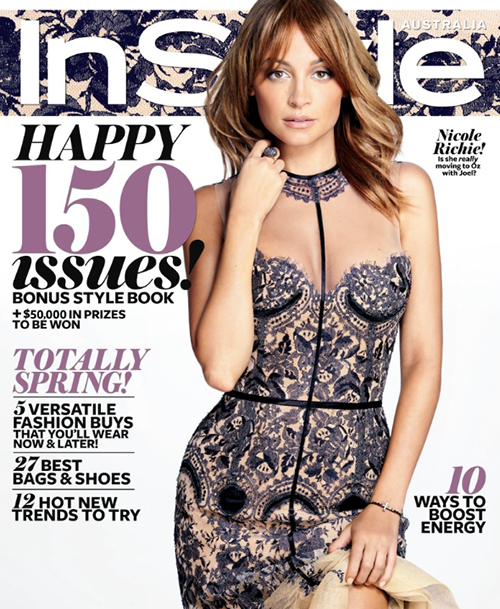 Nicole Richie covers the September 2012 issue of InStyle Australia, looking pretty in a Thirty Four Disciples lace dress. Nicole has recently spent a lot of time in Sydney, as her husband Joel Madden is a judge on The Voice Australia. In the exclusive interview Nicole revealed she’d consider making a permanent move to the city, saying, “As for whether we’re relocating to Sydney, it depends on how much Joel will be working there. I have a strong love for Sydney and I’ve always had a sort of attachment to it. I love the beaches and the friendly people.”

Nicole also discussed her design inspiration for Winter Kate and House of Harlow 1960. “My inspiration always starts with music,” Nicole revealed. “I don’t have muses – it’s not so literal – but I’m obviously inspired by the music of the ’60s and ’70s. I love the overall freedom of that time. The idea of clashing didn’t exist, and you were able to freely mix fabrics, prints and colours.”

Are you pleased to see Nicole Richie on InStyle Australia‘s cover? Do you like her cover look?